Threats Of Hanging In The Workplace?

Sep 25, 2017/Richard Cohen/Comments Off on Threats Of Hanging In The Workplace?

It was just last month – August – that I posted my most recent article about the use of the N-word and nooses in the workplace.  In Above the Law I noted that:

“Unfortunately, recent events make it time to revisit the N-word in the workplace — which I wrote about only last month. At that time, I called it ‘progress’ that a federal appeals court had found that a single use of the N-word was enough to create a hostile workplace, and thereby constitute actionable harassment under Title VII.

Earlier, I wrote that ‘[i]t seems that racial harassment cases always have the same racial slurs and tropes: either the N-word, a noose, or both. Always. Although KKK hoods are becoming popular these days.”

In only the last few weeks there have been three new EEOC lawsuits and one settlement – each involving, among other things — the N-word, and/or nooses!  And in one, a supervisor made a wire noose and threatened to hang the African-American employees! 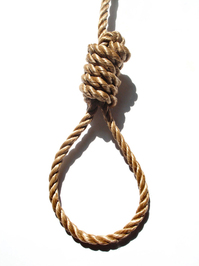 Here Are The Latest Racial Harassment Cases – Notice Any Similarities?

Most recently, the EEOC sued an Illinois fence installation company.   Why?  The EEOC alleges that “a black employee was repeatedly subjected to racial slurs and comments and other offensive conduct, including the noose display. Although the company was aware that racial harassment was occurring, it took no action to stop it.”

Another noose case.  I have never seen so many of these cases before.

“More than 50 years after the passage of the Civil Rights Act of 1964, it is not only illegal but unacceptable that employees are faced with the choice of working in the presence of a noose or not working.”  Thus spoke an EEOC lawyer.

The EEOC also sued an Indiana nursing home based upon two alleged claims:

We’ve seen before that it is not who is doing the discriminating or harassing that matters, be it a co-worker or resident, but only that the workplace is hostile and the employer knows about it and does nothing, or worse, cooperates in the discriminating or harassing.  An EEOC regional attorney said “It is difficult to comprehend that 50 years have elapsed since the adoption of the Civil Rights Act, and employers still do not understand that it is unacceptable to honor the discriminatory racial preferences of some or any of their customers.”

And in a third case, a Georgia grocery store owner allegedly subjected three African-American employees to “daily use of the words ‘n—-r,’ ‘monkey’ and other racial epithets. The owner also prominently displayed racially offensive posters with monkeys displayed on them in the meat department intended to humiliate the black employees.”

To make matters worse, after each of the employees filed EEOC charges, he tried to “persuade” them to withdraw the charges, and fired them when they refused.

Finally, a Minnesota construction company agreed to settle an EEOC suit in which it was alleged that it subjected two African-American employees “to racial harassment during their employment by a white supervisor, which included racially derogatory comments including calling them ‘n—-r.’

The supervisor also made a noose out of electrical wire and threatened to hang [them].”