How Can Employers Recognize Signs of Impending Workplace Violence?

Jun 3, 2019/Amy Epstein Gluck/Comments Off on How Can Employers Recognize Signs of Impending Workplace Violence?

But let’s discuss this.

Late last week and over this weekend, I, along with the rest of the country I’m sure, read about the horrific events that occurred in a municipal building in Virginia Beach. There, a “disgruntled employee” opened fire at his workplace and murdered twelve colleagues.

I don’t know why the gunman was disgruntled. I know nothing about his workplace. Actually, I learned today that the gunman had resigned from his employment on Friday but that his employment was otherwise unremarkable, i.e., there was nothing in his personnel file to even hint at a problem.

Where does that leave us in terms of prevention? How does an employer prepare for this type of unthinkable violence from occurring in their workplace?

Note: I’m going to leave my opinion about gun laws out of this post, and just focus on the employment law aspects.

Note #2: There’s no catchy photo today to go along with the subject. I mean, what would be apt?

Are Some Workplaces At Higher Risk for Violence?

According to the Society of Human Resource Management (SHRM), of which I am a member and is a good resource for all things employment compliance, the answer is yes. These industries are at higher risk for workplace violence: health care, taxi and for-hire drivers, and late-night retail establishments (gas stations, liquor/convenience stores).

Incidents of Workplace Violence Are Climbing

According to a 2019 SHRM research report, 19% of HR workers are unsure or don’t know what to do when they witness or are involved in a workplace violence incident, and 55% do not know if their workplace has a violence prevention program. While in some cases an incident is unforeseeable, 48% of HR surveyed reported that at some point, their company had experienced workplace violence.

While we lack a crystal ball and cannot see the future, employers can prepare themselves for violence and learn to recognize some warning signs in employees.

There May Be Warning Signs Prior to Workplace Violence

With these (alarmingly high, to me) statistics in mind, let’s talk for a minute about how companies can prepare for workplace violence, whether the company is large and can afford outside security or small and may rely on HR or in-house or outside general counsel.

Some warning signs may be cause for concern, but generally, certain behaviors including acting belligerently, being disruptive, aggressive, and hostile or someone who seems angry frequently, holds grudges, is hypersensitive to criticism, or blames others can be signs. While this may be difficult to discern as a threat or warning sign, other signs, to me, more strongly indicate a problem: to wit, personality changes. According to SHRM:

Someone who usually is friendly and outgoing becomes quiet and disengaged, that could be cause for concern. Sometimes people who experience a loss, a death, a reprimand, financial trouble, a layoff or termination can snap. Be mindful, too, of people who are the victims of stalking or domestic violence. Their personal lives might put their colleagues at risk. 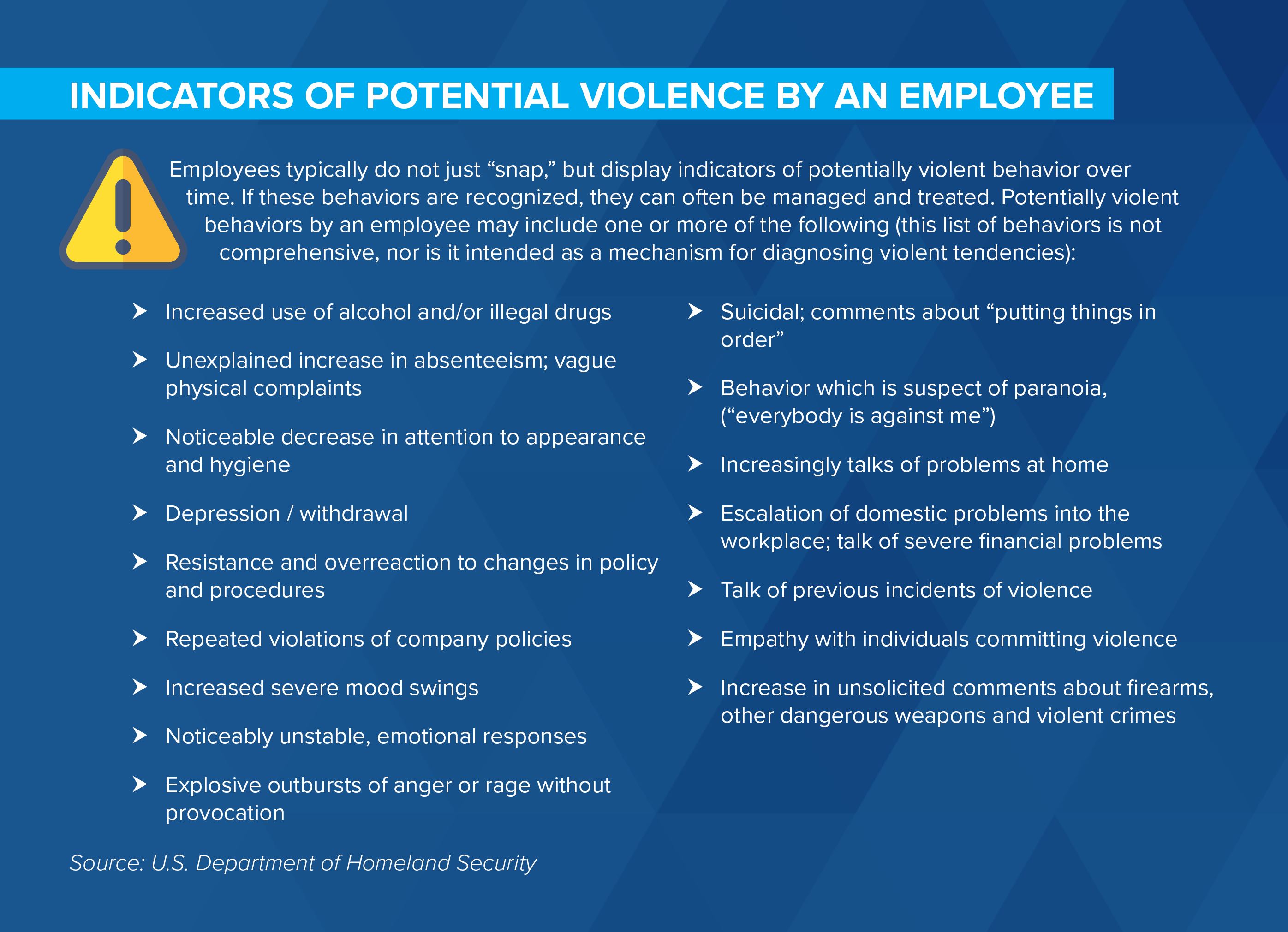 I think that in the same way that the ADA tasks companies with opening a dialogue and engaging in an interactive process when they suspect an employee has a mental illness, as I told you in this post about mental illness in the workplace, the same is a good idea in order to possibly detect an escalating threat.

Additionally, according to one risk assessment company, while there is not a general profile of an employee who is likely to turn to violence against him or herself or others, there are four types of employees that might cause trouble if fired:

The above represents just a fraction of what employers should consider when thinking about how to prevent workplace violence. I’ve hardly scratched the surface here.

And, I’m not saying that any of the above factored into the Virginia Beach shooting or that the gunman’s employer should have known. There is very little we know so far. I would never dream to know, let alone advise, as to what makes a human being open fire on floors full of innocent people.

However, this week, I’ll provide additional warning signs and other information for employers to consider. Often, the more we know, the better.